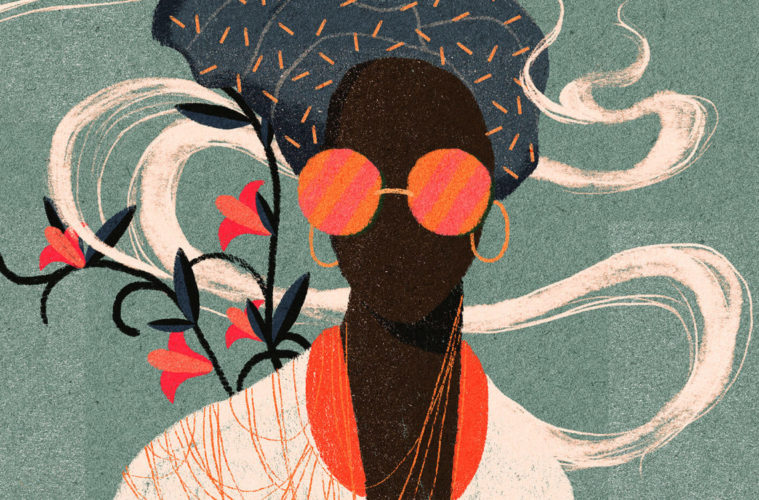 Photo by Willian Santiago for WePresent by WeTransfer

You may not know who they are, but you’ve definitely seen their work: It graces album covers, headlines major ad campaigns, and brings life to gritty street corners. It embodies a state of mind, evoking the rhythms of our ancestors and a way of living pervasive in our psyche yet not entirely visualized in real life. It harkens the spiritual, the mystical, and the magical; it transports us to jungles and pyramids and galactic spheres. Meet seven of the most iconic graphic artists working across the global South. 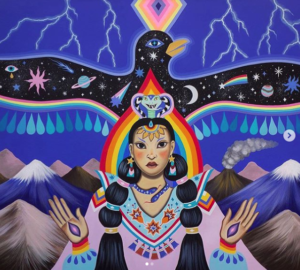 Radically feminine, infused with iconic pre-Hispanic allegories, and saturated with vibrant, psychedelic hues, Paula Duró is one of Argentina’s most recognizable artists. Blending ancient symbolism with futuristic mysticism, her paintings, drawings, installations, and graphic art have landed on album covers and added life to scores of Buenos Aires-based locales, where the artist lives and works. Long-time collaborators like ZZK’s Chancha Via Circuito, Miss Bolivia, and Villa Diamante call on Duró to visualize the rhythmic sounds of their new wave cumbia.

Illustrator Willian Santiago works in the tradition of Brazilian modernism, which emphasizes Brazil’s indigenous culture over its European influences. Fusing figurative silhouettes with dense tropical fauna in a retro color palette, Santiago’s modernist influences are clearly visible in the rounded geometry of his figures and kaleidoscopic impact of his foliage. Burnt oranges, mauve pinks, and turquoise blues to his native Londrina, a small town in southeastern Brazil. 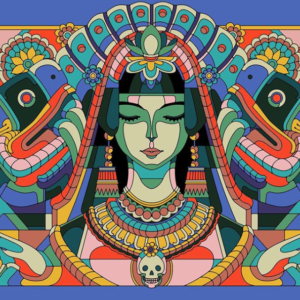 Raul Urias’ rich collages of Mayan iconography have clear Art Deco influences. Inspired by the style’s heyday in his native Mexico, the illustrator and graphic designer creates a dizzying burst of symbolism in bold color. Frequent motifs, like Mayan masks, falcons, and rattlesnakes are juxtaposed with deco elements like fans, sunbursts, and geometric shapes. Urias, who previously worked as an illustrator for Marvel Comics, has spent years honing his singular aesthetic – today, Urias has worked with some of the world’s largest brands, including Spotify, Sony Music, and Nike.

Inspired by nature and organic forms, Carolina Nina Buro’s galactic abstractions transport us to an otherworldly plane. Looming planets, mystic iconography, and lush vegetation sprout from her surrealist graphic illustrations, and are frequently used by her many collaborators in the electronic music scene. The Colombian-born Nino, who today resides in Buenos Aires, has collaborated with indie favs like Bomba Estereo, Mateo Kingman, and the Nomade Festival alongside major brands like Adidas, which tapped the artist to create graphic prints for a recent athleisure line. 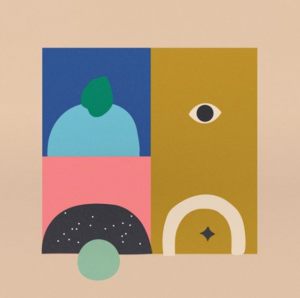 Diana Castro, who works under the moniker Pana Li, creates minimalist illustrations with graphic elements. Her work stands out for what it leaves out of the frame – where most Latin America-based creators tend to inundate their work with imagery, Pana Li prefers to explore how less can be more when we’re applying design, music, and technology as a tool for self-transformation. In her work, bright pastels and playful geometric shapes are strung together inspired by her favorite playlists. The multi-talented Castro, who is also an art director and musician, recently launched “Ser Paraiso”, a line of mindful design accessories that include wallpapers, mantras, and jewelry.

Arlene Delgado’s tropical vibe and clean, geometric aesthetic packs a lot of punch in her native Miami. The designer and content creator has been tapped to create viral graphics for brands like Lululemon and Tropical Vinyasa, and for bands we love like Femina and Ilé. Her colorful environment is her primary inspiration, as she draws inspiration from the pastel-hued concrete grids of Miami Beach, injecting these landscapes with exotic plants and spiritual iconography. 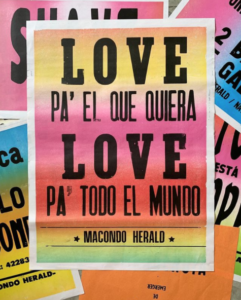 Characterized by bright colors, bold contours, and an iconic neon gradient, cumbia posters were developed as a visual representation of its namesake rhythms. Macondo Herald builds on the tradition and makes it their own, playing with words, phrases, and quotes that make up the Caribbean imagination. Inspired by the writings of Colombian literary icon Gabriel Garcia Marquez, Macondo Herald was created by artist Nicole Bornacelli and today is dispatched from Colombia’s Caribbean coast. Look out for these large-scale posters scribbled with ruminations on music, el amor, and a breezy Caribbean way of life.